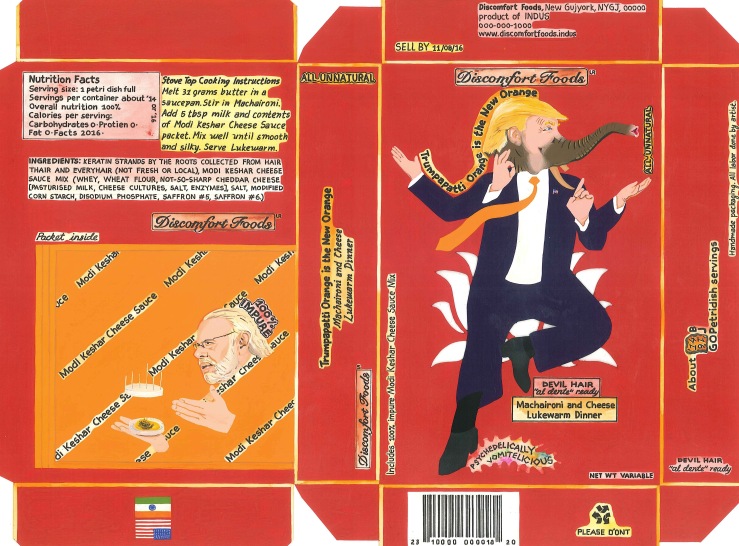 Trumpapatti Orange is the New Orange, Machaironi and Cheese Lukewarm Dinner, box design, gouache and pen and ink on paper, 2016.

Back in 2014, Narendra Modi’s slogan in his ultimately successful campaign for the prime ministership of India was Achhe Din Aane Wale Hain (Good Days Are Coming.) His party—the right-wing BJP—somehow won a majority on its own with an unprecedentedly low vote share of only 31%.

That victory has ejaculated blobs of orange rage with RSS (BJP’s parent organization) and its hindutva-heavies at the core. They’re hurriedly quashing any voices or actions of assertion and inclusion that might raise their heads anywhere along the spectrum of students, Dalits, Muslims and other minority communities, across the country and in occupied Kashmir.

At the same time and closer to home, Donald Trump’s slogan “Make America Great Again” is making its rounds and mobilizing a previously non-organized political support base. Meanwhile, the #NeverTrump establishment is ignoring the possibility that thanks to them, someone even more mainstream and dangerous than the current orange-coiffed frontrunner might end up as strangelovian commander-in-chief.

There’s a common pattern in the histories of the two countries that birthed these two candidates with such similar sounding, thoroughly hollow campaign slogans. Hollow, because our histories are also populated by generations of the excluded. So what Trump and Modi really meant to say was, Make America Great Again But Not for You, and Achhe Din Aane Wale Hain Magar Tumhare Liye Nahin.

Look at the slogans as club sandwiches. Think of the slice of bread at the bottom as the colonial times that set things in motion; the meat in the middle as the neoliberal period and its trail of destruction, layered with today’s increasingly unsettling leanings among certain sections of the population toward hate, nationalism, nativism, hindutva, and evangelical extremism; and the top bread slice as Islamophobia. Bite into one of these sandwiches and you begin the process of digesting the weight of the two ominous campaign slogans . . . and heeeeerrrrre’s Johnny. 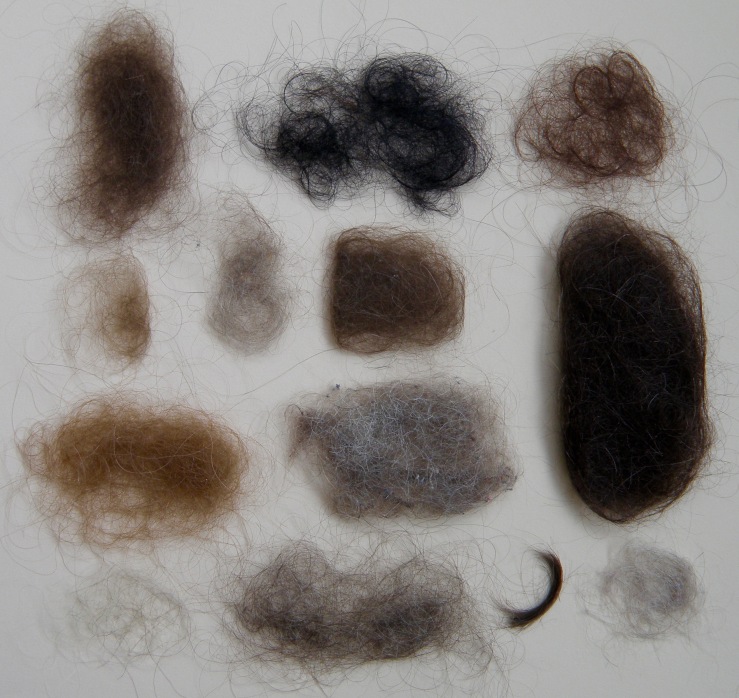 So, how bad is it? Trump’s support network is built on middle aged white, blue-collar working class Americans. Many of them are gun-happy, nativist, extremist evangelical Christians who have all along been left out of the neoliberal profiteering agenda. They’re driven by a sense of isolation, fear and hatred, with many of them dying in large numbers from gun suicides, alcoholism, and drug (predominantly opiate) addiction. Barbara Ehrenreich, founding editor of the Economic Hardship Reporting Project, also refers to them as the “Dead, White and Blue.”

These folks flocking to Trump rallies in the primaries need someone weaker than themselves upon whom to vent their anger and frustration, so they’re turning on other minorities—women, immigrants, Latinos, blacks, Sikhs, Muslims, etc.— with Trump cheering them on, labeling his followers with a Nixon-era term “The Silent Majority.”

The only difference is that the humans making up the so-called Silent Majority have not yet processed the reality that in the bigger scheme of things, and in the designs of the moneyed, corporate and powerful elite, Trump included, they have always been a part and parcel of the shock-absorber generation. The GOP front-runner is just using their vulnerability to his own narcissistic advantage. In fact, Trump is so narcissistic that he even interrupts himself.

One supporter said, “I mean, it seems like we really go overboard to make sure all these other nationalities nowadays and colors have their fair shake of it, but no one’s looking out for the white guy anymore,” and that they suffer from “reverse discrimination.” The hands that are holding up the signs that say, ‘All Lives Matter’ are perhaps projecting their own newfound white angst, and this anger seems to be misdirected toward others like themselves instead of our presidential candidates and the whole political system in general.

And, amidst all that’s unfolding around us, Ehrenreich is so right to add that “it’s easy for the liberal intelligentsia to feel righteous in their disgust for lower-class white racism, but the college-educated elite that produces the intelligentsia is in trouble too…..Whole professions have fallen on hard times.”

An interesting parallel mutating in the shadows of Achhe Din and Make America Great Again is how this smorgasbord of hate, rage, fear, dissent, rallying shouts of Jai Bhim….Lal Salaam, and clamor for equality and justice among the various shock-absorber generations of various hues and levels of poverty and isolation are playing out in relation to each other and their place in history. In both countries, those in power have preyed upon and monopolized resources and communities both within their own borders and outside them. And in both countries, some oppressed communities have, in turn, preyed upon those who are even more oppressed.

Since there is nothing whiter than white and nothing more upper-caste than upper-caste, almost everyone under the ideological grip of whiteism or casteism is feeling some sort of social/political/economic isolation, with many acting against their own self-interests and taking shelter, even participating in, their leaders’ violent and greedy machinations at a local level, and in the most disturbing ways imaginable.

Annihilation is a loaded word, its meaning depending on who applies it, when, and to what end. For example, the Native American population of what is today Trumpistan were annihilated by the imperialist Europeans, and those who survived were relegated to reservations. In the years that followed, annihilation was augmented by racism, McCarthyism, xenophobia, islamophobia, wars on terror, wars on women, bigotry, and anti-immigration.

But annihilation has another side. Arguably the most legitimate grounds for it were laid out by one of India’s most radical thinkers, Bhimrao Ramji Ambedkar, who in 1936 wrote a seminal speech that delivered a deadly critique of Hinduism. Titled Annihilation of Caste, it was meant to be read to a mild, upper-caste, reformist Hindu group. But they never heard him deliver it, because they found its contents too “unbearable.” Perhaps because it held a mirror too close to their upper-caste souls.

In Modistan, my ancestral invading Aryans, and subsequently the disciples of Brahmanism, co-opted the land’s indigenous population, furthering the slow, deliberate annihilation of a people’s mind, body, and spirit, sowing the first seeds of casteism and exploitation.

In the process, they have instituted a different kind of “reservation”: a kind of affirmative action system that puts a semantic twist on the Native Americans’ history, “reserving” government jobs and publicly funded colleges for disadvantaged groups—positions through which the “beneficiaries” can expect to effect exactly no change. But those Aryan policies didn’t just drop out of thin air. They were put there in place by design.

With the ever-evolving (and revolving) exclusion that the ideology of casteism entailed, with the horrific and hurried violence of the RSS regime that’s being carried out today, we come full circle, to a place unfamiliar to Westerners who still regard Hinduism as an oasis of nonviolence, yoga and vegetarianism.

Most Hindus believe that we are living in Kali Yuga: the “End Times”, when Shudras (the lowest of the four castes, India’s version of Trumpistas) perceive that they have access to some power and assertion and bring on a clash between the haves and have-nots that results in universal destruction.

The lid coming off this petri dish has exposed the implosion of a system driven by imperialism, racism, casteism, religious extremism and capitalism, with more and more of the world’s species, people of all shapes and sizes, hues, and gender affiliations, waking up to find themselves included in the exclusion pile. What happens next is anybody’s guess.

One Pound Capitalism, a Pinch of Democracy, and Trumpapatti Orange is the New Orange

One Pound Capitalism, a Pinch of Democracy is a series that brings to our dinner tables some meals that expose the extreme consequences of neoliberal policies that are wrecking the planet, and the daily lives of many around the world. The type and quantity of each ingredient used and the presentation of a meal is determined by choosing key statistics and points that are embedded in the issue being conveyed and converting that to a measurement or meal design. Indeed, there may be a dish or two that tastes somewhat strange, with an ingredient or two out of whack. But that’s intentional.

The box-meal featured here that’s designed around our off-the-spectrum politics is called “Trumpapatti Orange is the New Orange” (the brand name) Machaironi and Cheese Dinner with Modi Keshar Sauce. And, here are some quotes that inspired its design:

“We worship Lord Ganesha (Ganapati.) There must have been some plastic surgeon at that time who got an elephant’s head on the body of a human being and began the practice of plastic surgery.”—Prime Minister of India, Narendra Modi.

“But [Modi’s] hair style, which used to go sideways, went slicked with straight-back comb-over on Thursday….A politician seeking to make a name for himself should create a characteristic hair style and stick to it for the rest of his life.”

“I am not a believer, and I will, unless somebody can prove something to me, I believe there’s weather. I believe there’s change, and I believe it goes up and it goes down, and it goes up again….We need unpredictability in this country….but, I have a good chance of winning. I don’t want the enemies and even our allies to know exactly what I’m thinking….You know what, we’re checker players and we don’t play well….wouldn’t it be nice if we could surprise them and knock the hell out of them….That was the beginning of China, that was the beginning of India, when India….by the way, India is doing great. Nobody talks about it. And I have big jobs going up in India. But India is doing great.”—GOP front-runner Donald Trump.

“The latest budget speech perpetuates a chronic blindness to basic social needs. Children are not mentioned at all and nor are (say) nutrition, social security or maternity entitlements.”

The Sanskrit word for hair is kesh, and saffron is kesar.

I clean toilets in 20 houses everyday. I use a tin plate and broom to remove the excrement that has collected in the toilet, I collect the excrement in a basket, and then I take it and throw it away. This work is so awful I don’t feel like eating.” — Manisha, Manipur district, Uttar Pradesh, January 2014.